Chromatogram was born from a commission as part of the ‘Art in Manufacturing’ series for the National Festival of Making.

The public art piece was located in the semi-delerict 1860’s built Cotton Exchange in Blackburn, giving visitors a chance to peek inside the loved yet overlooked town landmark. The contrast of the abandoned and semi-decaying historical surroundings against the sculptured cardboard designed pods made for a sharp design variation in the best way possible. 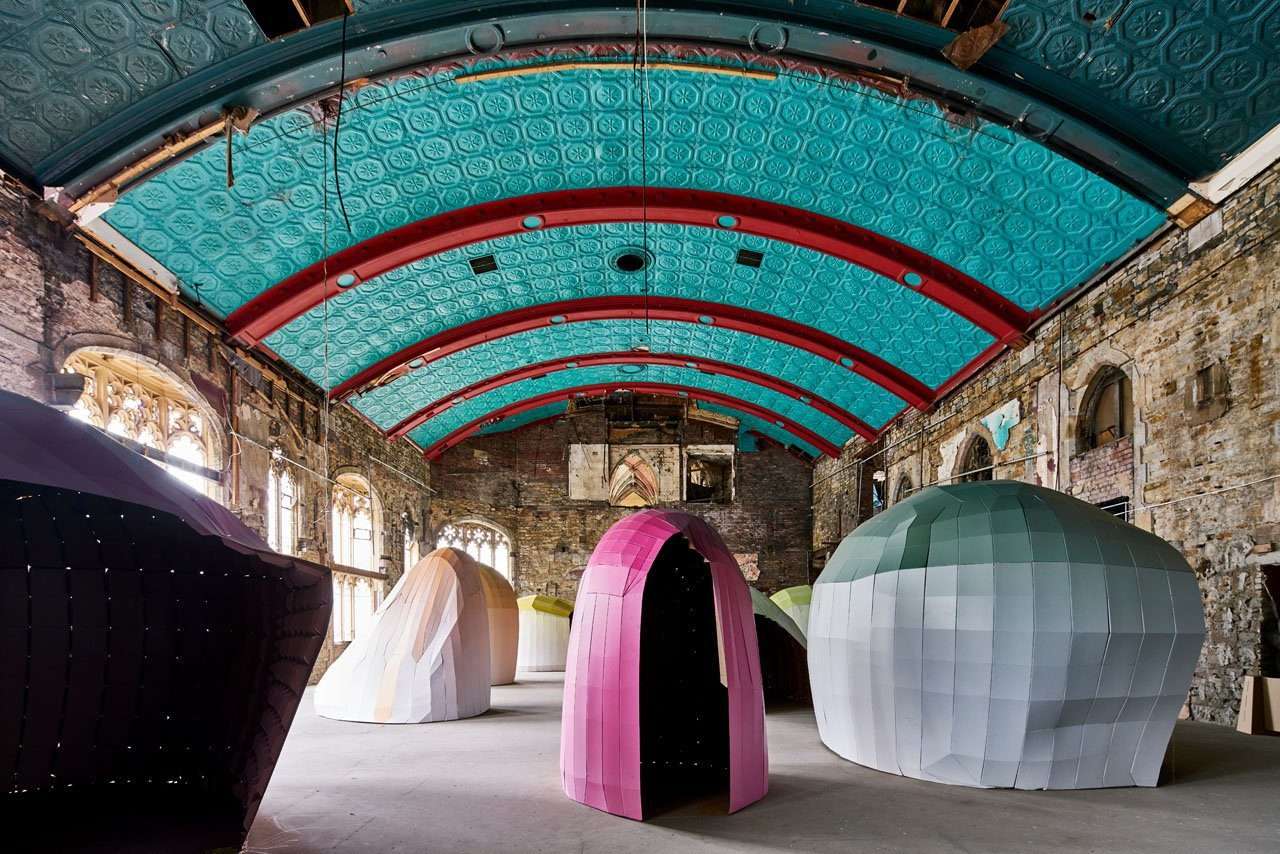 The design project was inspired by Lazerian founder Liam Hopkins when he undertook a 3 month residency at The Cardboard Box Company as part of the ‘art in manufacturing’ series. The series was introduced to encourage a creative expression of the histories, innovation and expertise of both the creative studios and artists and the manufacturing companies and the factory processes.

Working with the Cardboard Box Factory was a natural fit as they are also a highly creative established company and also a fellow Northern practice. Engaging to create high quality cardboard packaging as well as having combined principles in the areas of creativity and sustainability made them seem like the obvious choice and made for a satisfying collaboration. 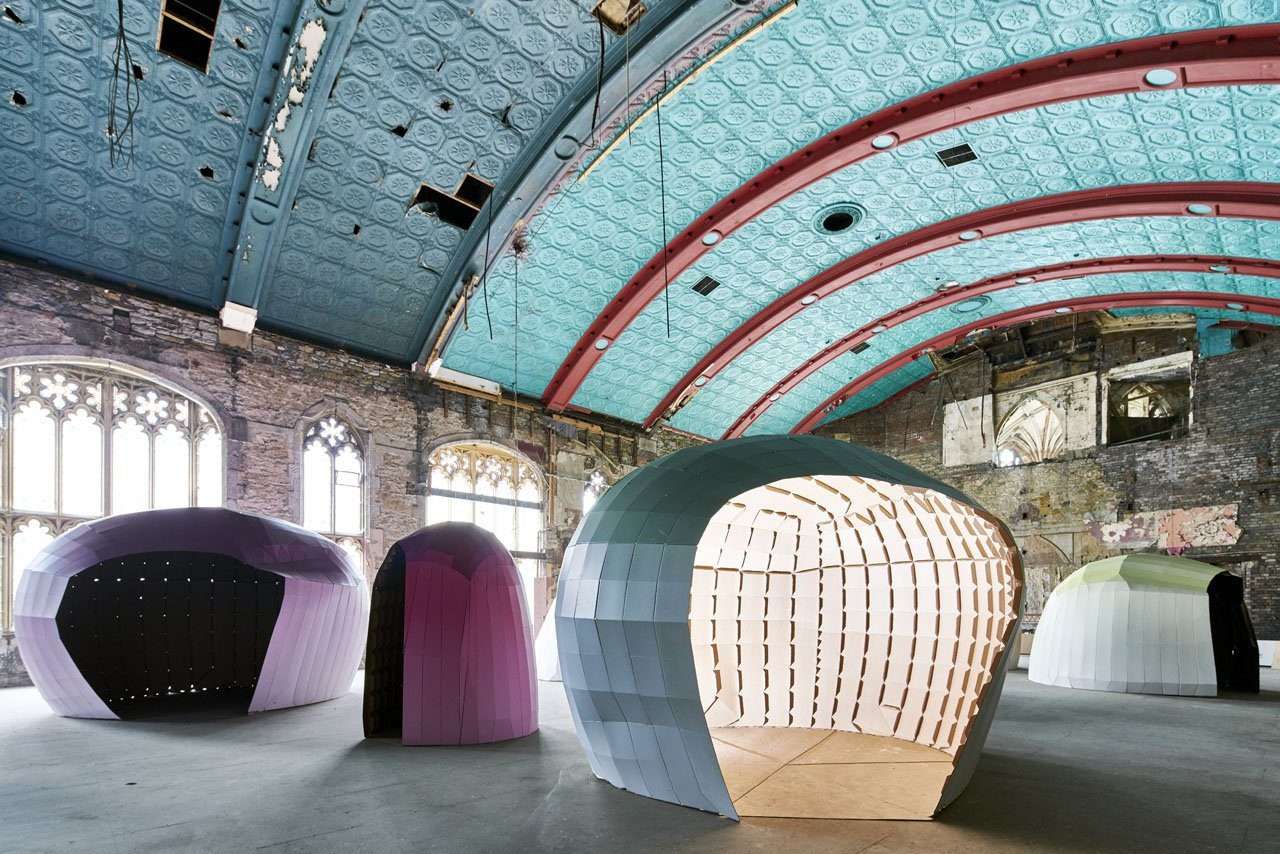 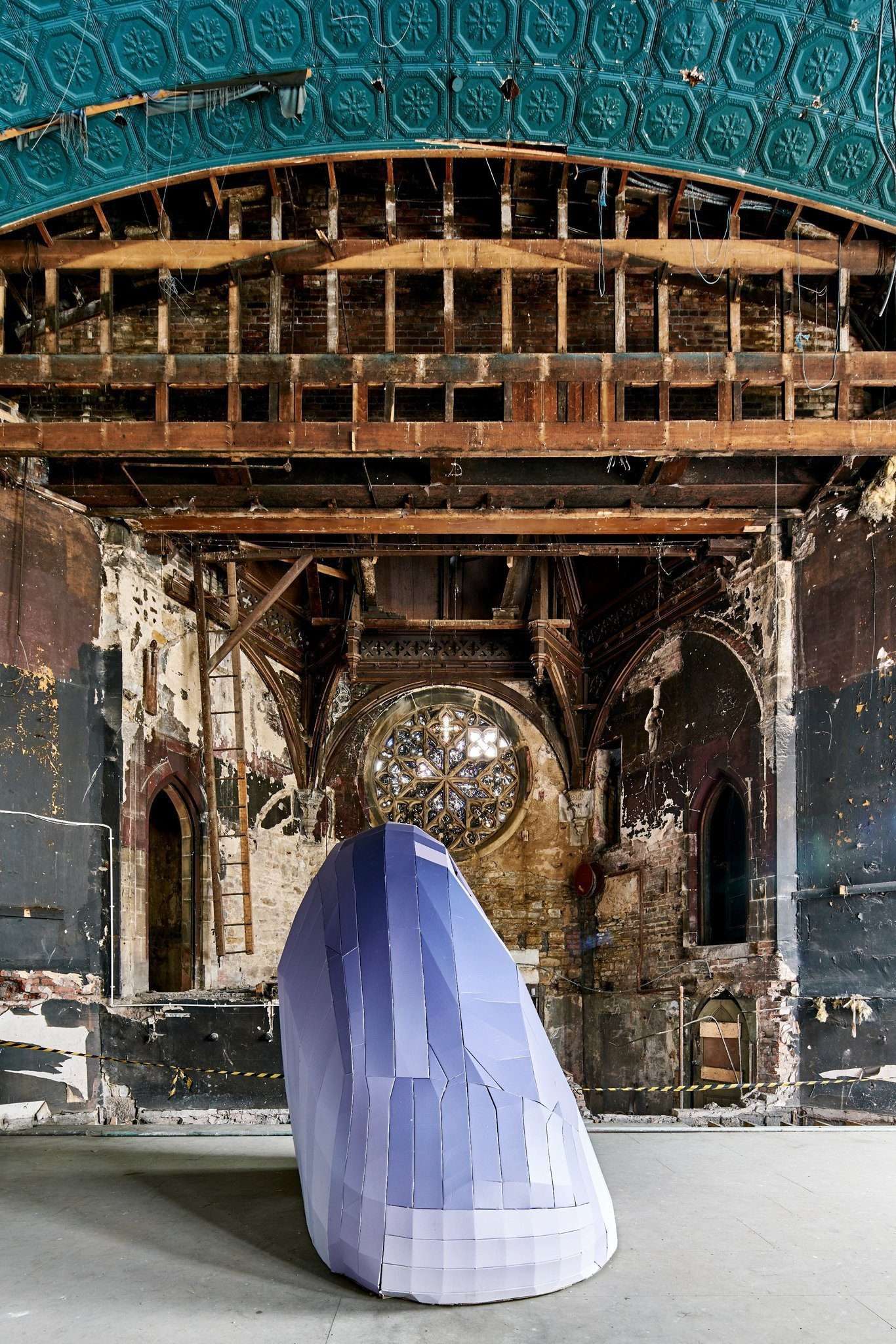 The result is a stark contrast between modern and archaic

The piece was about changing people’s interpretation of cardboard, this was achieved by omitting all right-angles typically associated with the material, and adding colour against the traditional brown kraft card. Noting that workers were entirely dependent on each other, yet worked largely alone in distinct sectors, the sculpture piece was created as cardboard structures that depict that relationship. The key was for each pod to represent different departments within the Cardboard Box Company which can stand individually but can come together to create something extraordinary, established and enduring.

Using irregular and organic forms, the interactive work purposely skewed the expected, strictly angular form of a cardboard box. The ideology of the public art interior piece was to utilize the versatility of overlooked materials and delve deeper into the capabilities of the cardboard box company and printed each cardboard structure with a striking, gradient colour scheme.  Each tone in the range has been used by the manufacturers over its 50 years history and presents a record of the stunning gradient of colours used over the years.

The faded glory of abandonment

Hopkins says: “Having worked extensively with cardboard, from developing furniture and architectural installations to collectible, small-scale sculpture, the strength and versatility of the material itself presents exciting possibilities. The opportunity to use the industrial fabrication techniques of The Cardboard Box Company gave this project the potential of working to significant scale and the venue, an imposing space with such history, presented more inspiration. The result is a stark contrast between modern and archaic, meticulously planned design and that which only abandonment, nature and time has created.” 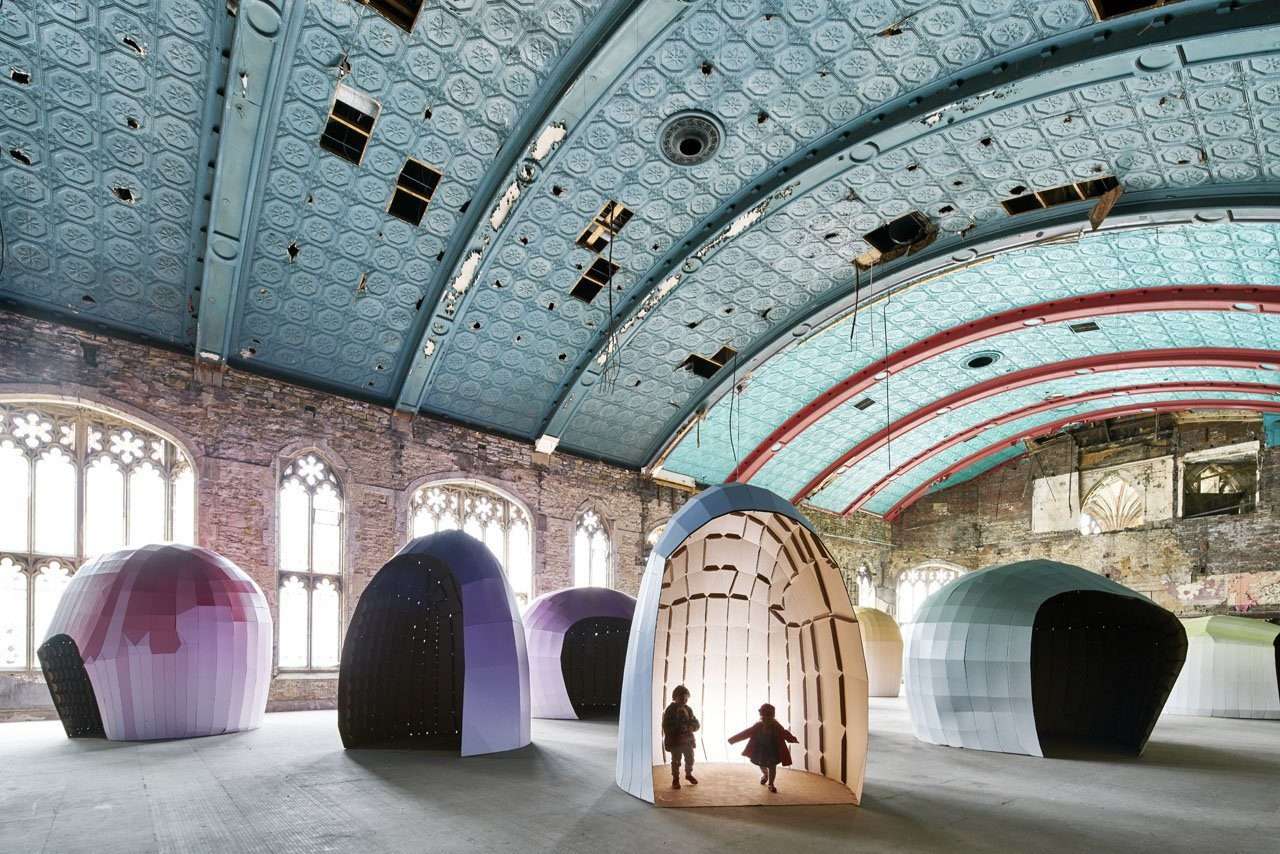 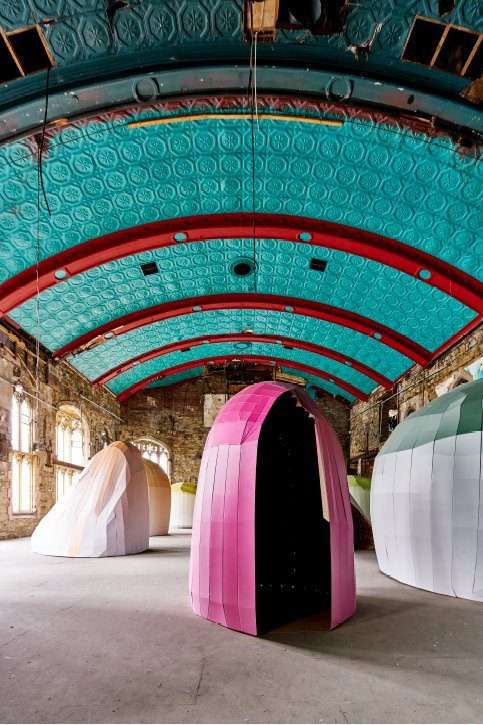 Each tone in the range has been used by the manufacturers over its 50 years history. It presents a record of the stunning gradient of colours used over the years. 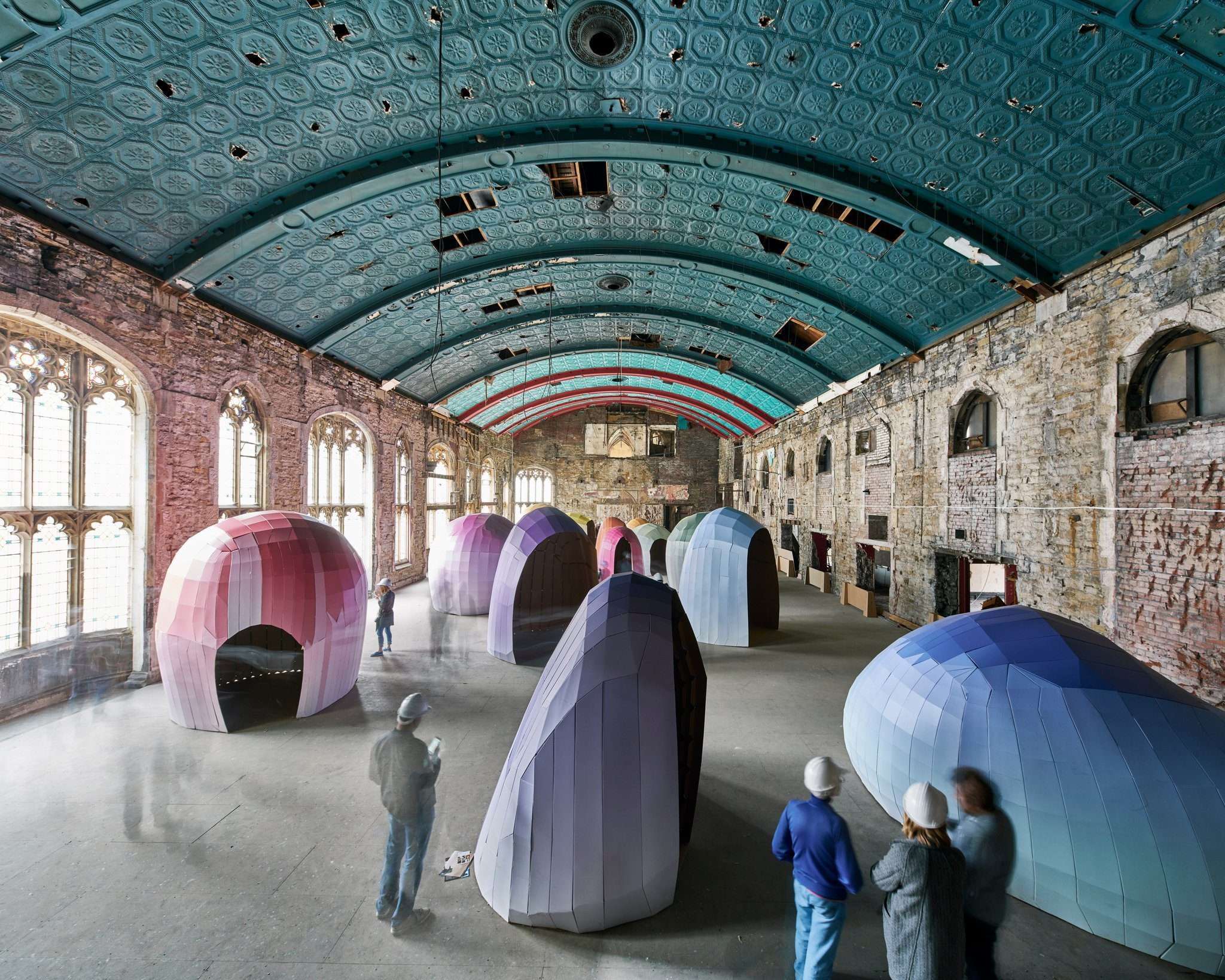 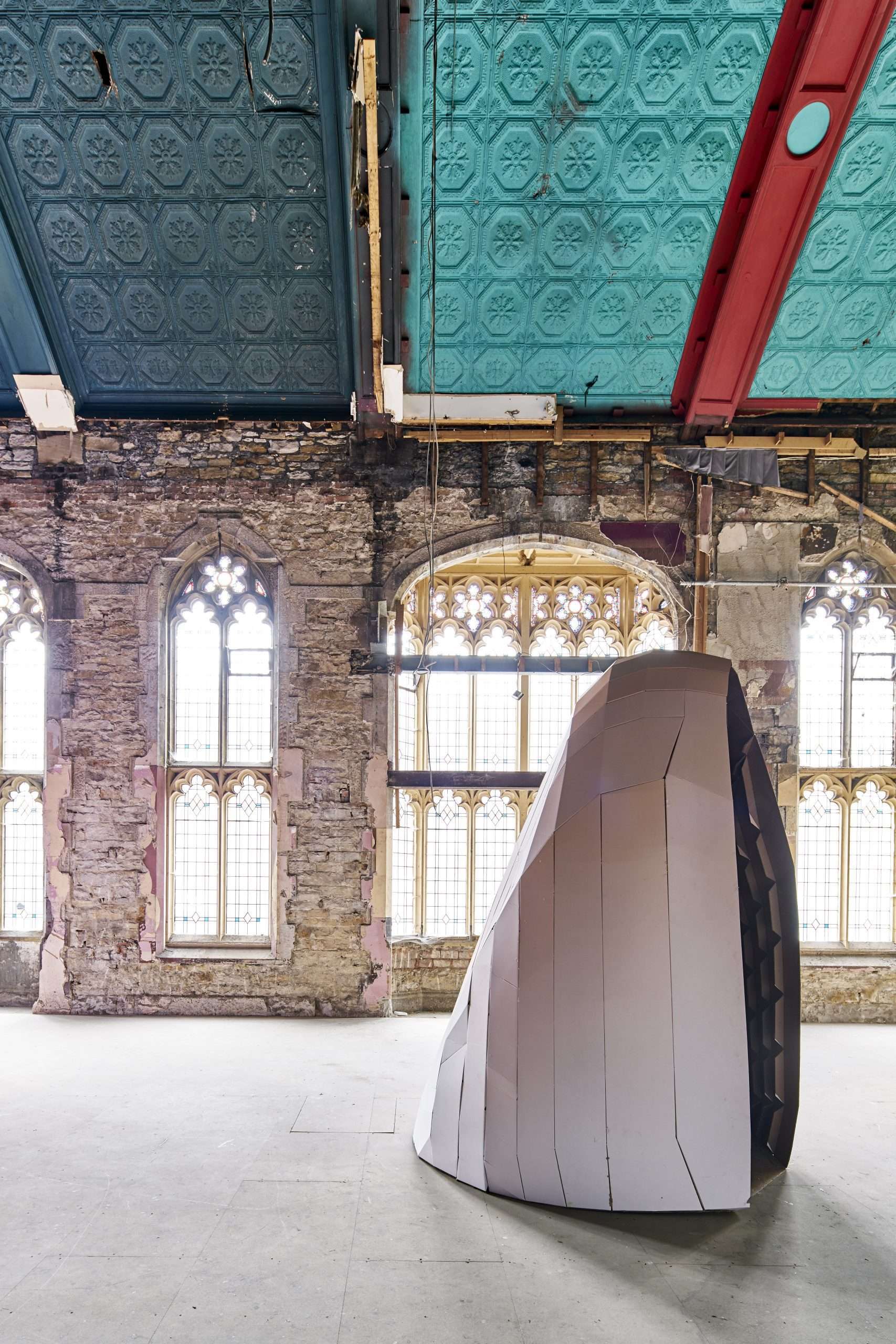