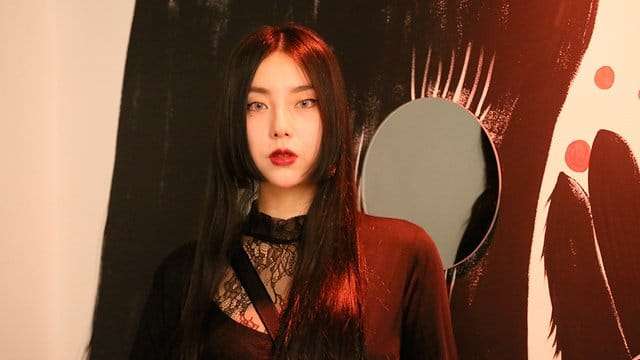 Koal was born in 1989 in Ulsan, South Korea and graduated from Animation high school in 2007.  She then moved to Seoul to pursue a career in fine arts. Jang’s work evolved from figurative art into her signature art style. Although she has a background in illustration work, Koal started out in painting and employs age-old techniques, using multiple layers traditional Korean paper, hanji  (Korean Mulberry Paper)  for the majority of her work.

Jang Quan’s solo exhibition ‘My Cup of Tea’ was recently held at the Everyday Monday Gallery for two month last summer amidst the global pandemic. All of the paintings presented in this exhibition were completed during an extended stay in the Netherlands. Over the past two years, the artist has held several group exhibitions in the United States, and has spent time recharging her work while staying at an artist residency in Paris, France.

As well as producing work from various parts of the globe, Koal has also exhibited in numerous galleries and museums worldwide. In more recent times these have included KochxBos Gallery in Amsterdam,  Corey Helford Gallery in Los Angeles as well as the Everyday Moonday Gallery in her home city of Korea.

Last year after her adventurous time living in Groningen Netherlands,  Koal had a first hand experience of how the Covid-19 pandemic has affected the artworld and documented this in a piece for cultural publication Juxtapose for their ‘Art in Uncertain Times’ column 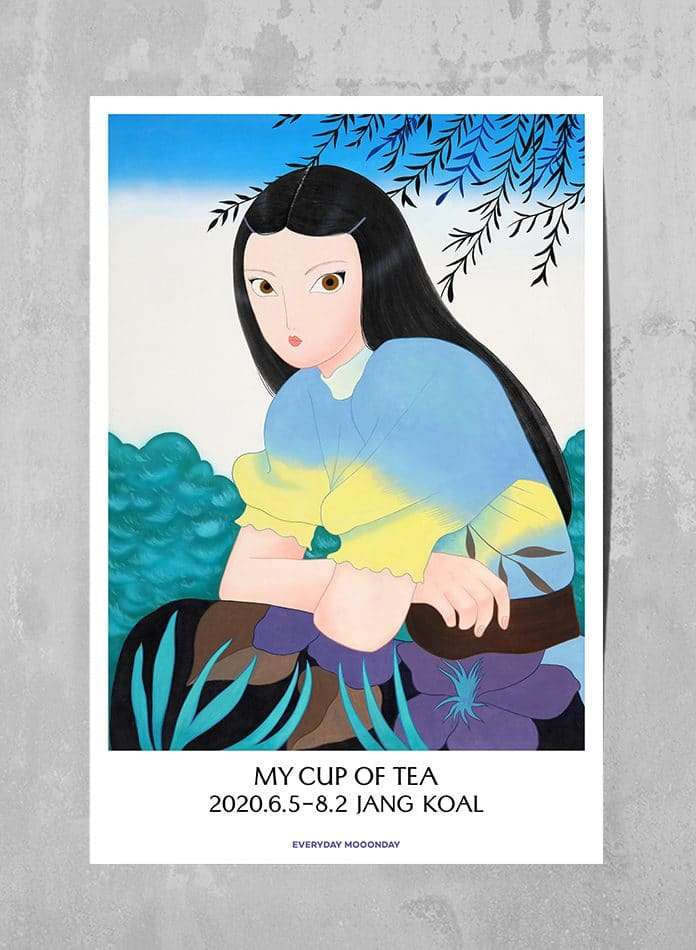 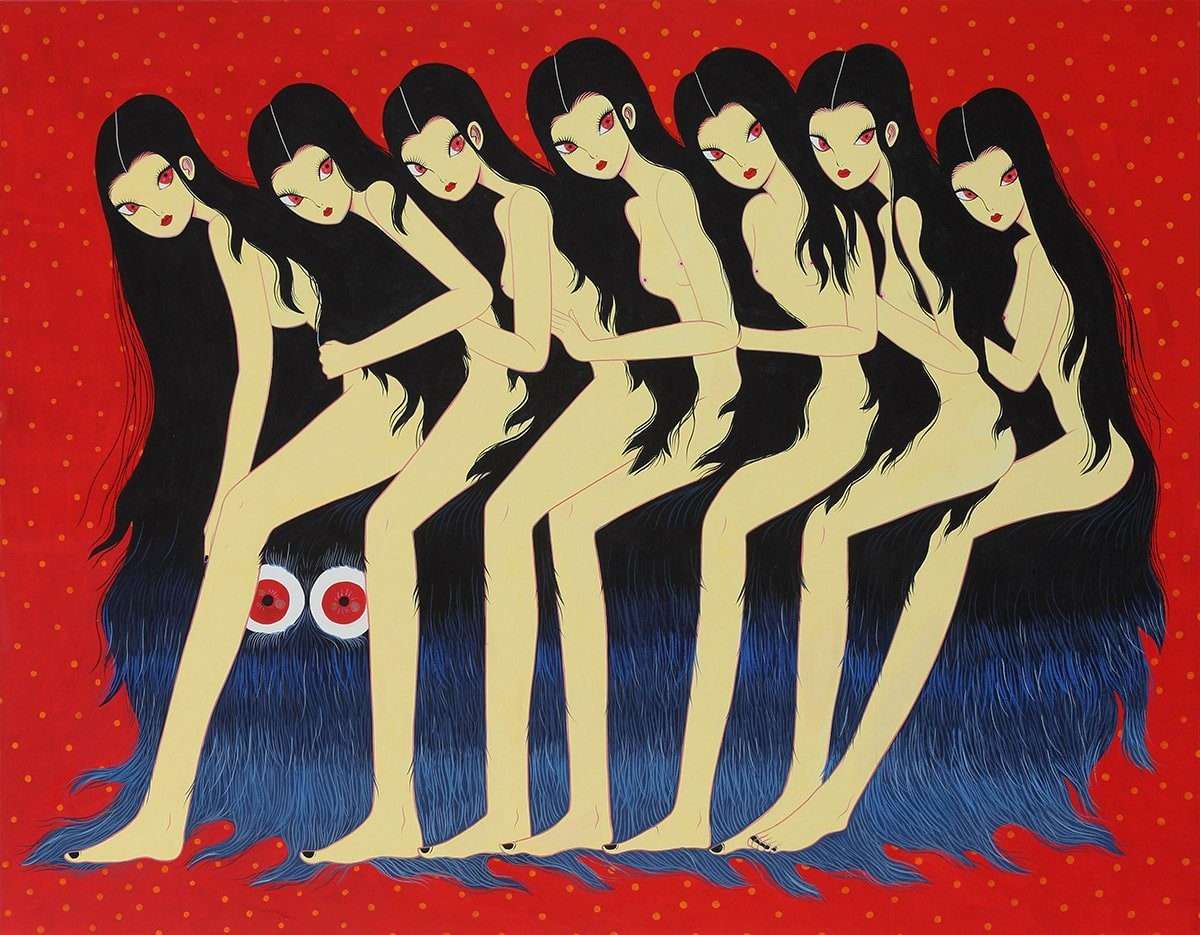 “If you ride a bicycle and pass the narrow street behind the house, you will find a forest trail with no streetlights and no toilets. You can easily meet swans floating on the lake, cats from other people's houses for a walk, and bats flying fast over your head when the sun goes down. They even greet others on a walk with a smile. In this peaceful moment, I want to preserve the affection of nature and humans for a long time.” - Jang Koal 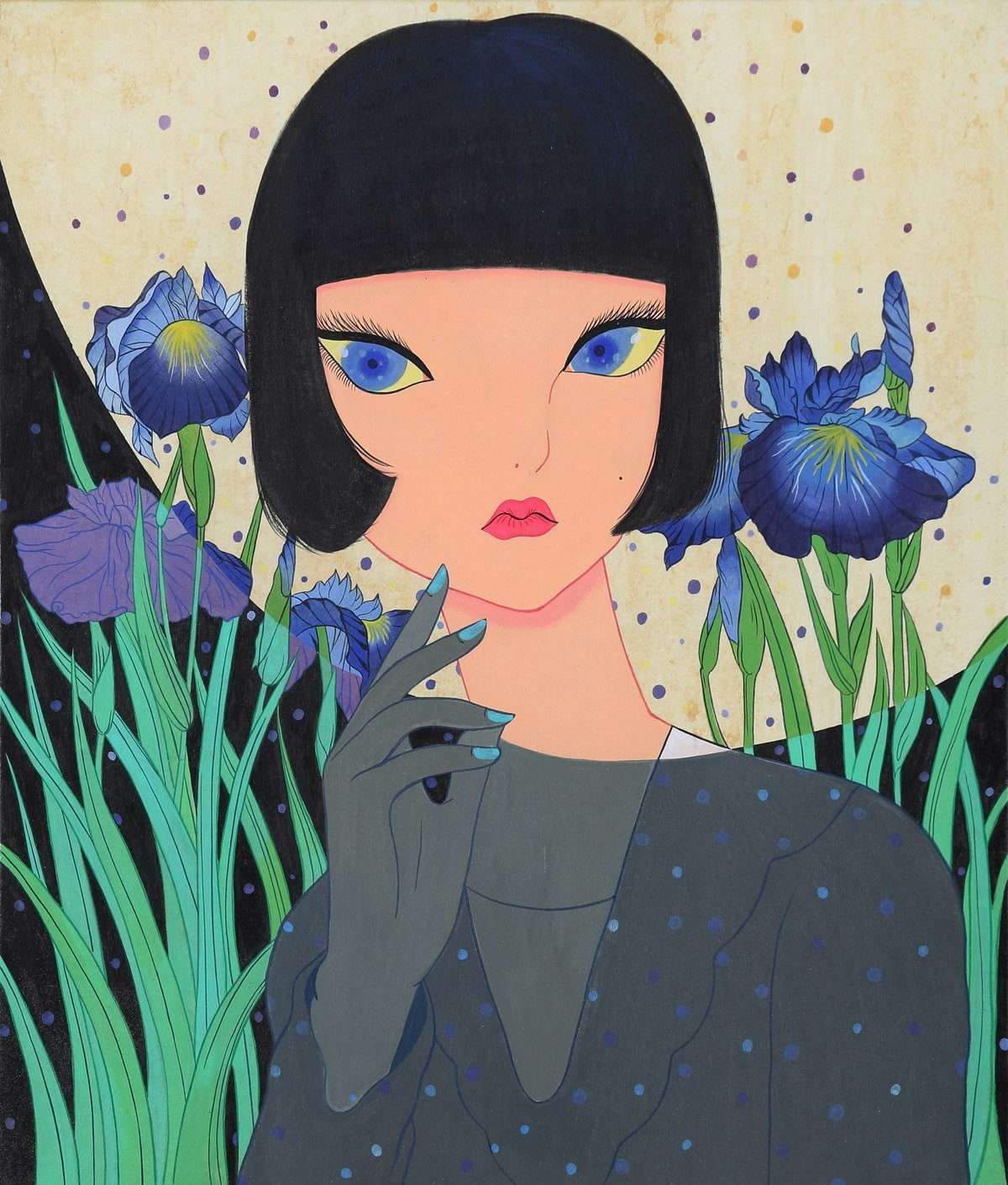 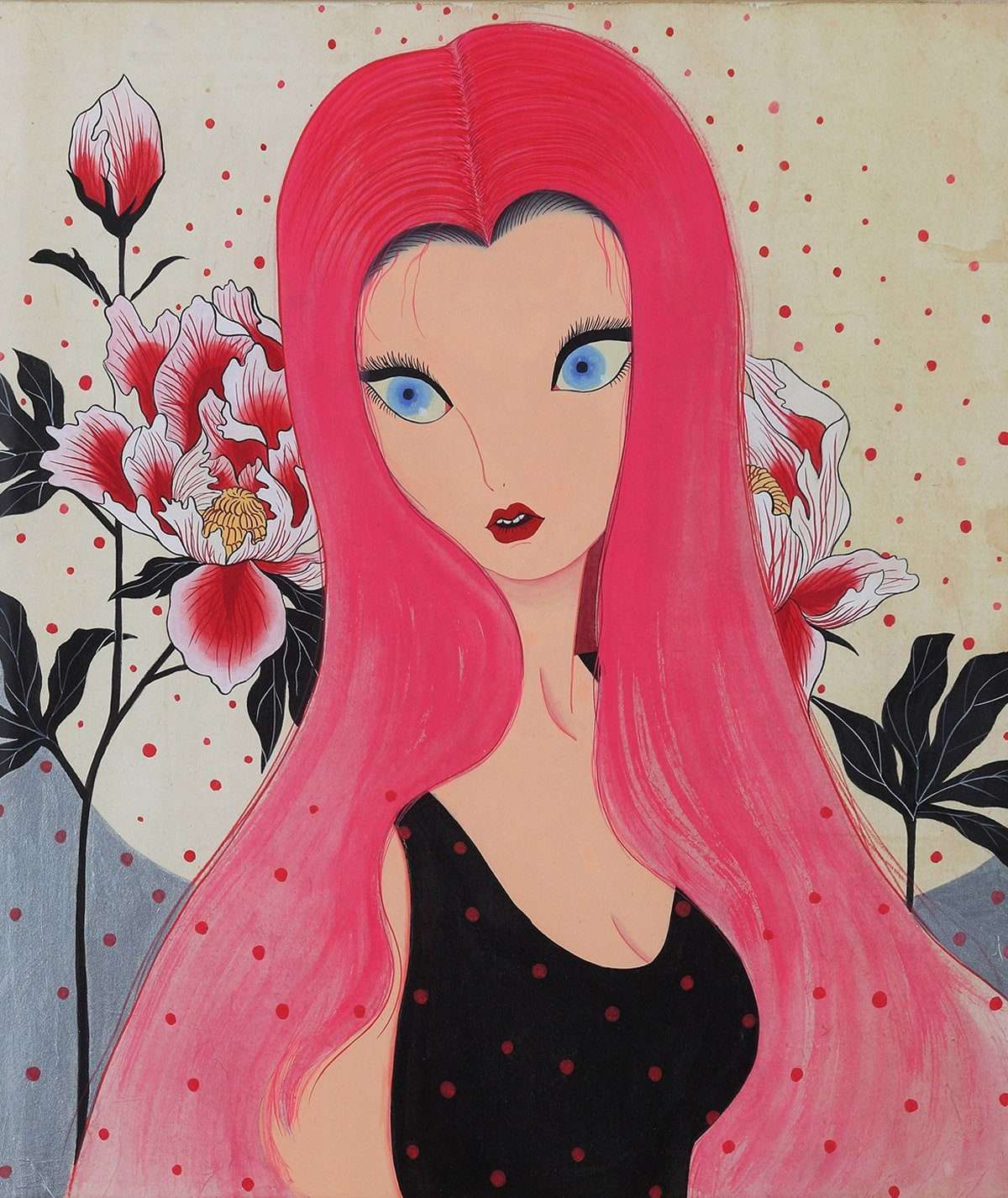 The artist blends soft feminine shapes with contrast colourful palettes personal palettes, conveying an unusual aesthetic that is the result of the analysis of a sweet female irony. Jang Koal’s works are a curious journey towards the exploration and understanding of the modern woman, of her simple and fun adventures and daily exercises that allow her to find comfort and take care of her body to manage her body, to always keep up with the times in a world that wants her perfect.

Many of the characteristics of the Seoul-based artist’s work is often challenging the traditional values and notions of Korea itself. Mixing the surreal, often uneasy, or mystic atmospheres with bright colors and harmonious lines and compositions, she is able to create a captivating tension in which her subjects seem to feel most comfortable.

Cat-like eyes, strong lashes, bright red lips and pale white skin are trademark features of Koal’s powerful figures, Koal’s femme fatales are seductive and mysterious the protagonists in a world where exploration and discovery are key. They are inspired by Asian Culture and elaborated by Koal herself

“Losing one’s sense of curiosity and the will to discover something new is even scarier than the unknown.” - Jang Koal 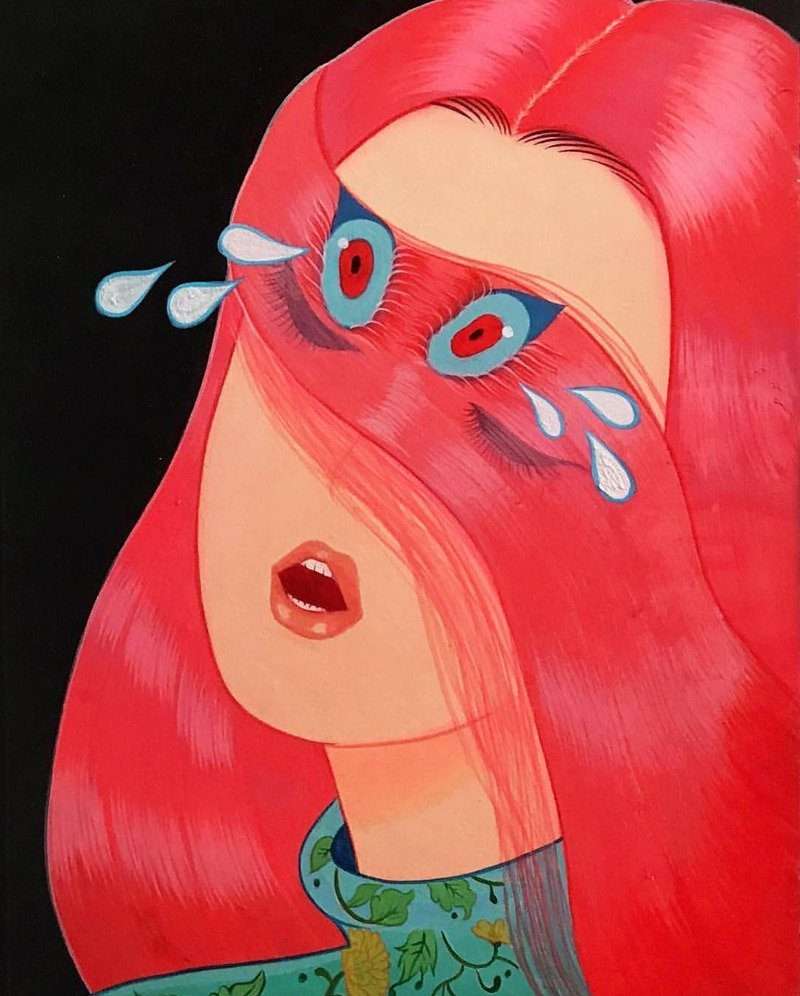 Jang Koal latest collection is inspired from a long standing tradition of feline-inspired art in her own dreamy style. Her series of paintings called Mirage Cat depicts beautiful, raven-haired women holding black cats that are actually made up of their own glossy locks.

So far, this ongoing project includes one sketch and three acrylic portraits painted on her usual canvas of hanji that is mounted on a wood panel. Each of the subjects is shown in a traditional portrait style, where they are either standing or sitting before the viewer. The women wear feminine dresses with intricate floral prints and keep their shiny hair down. As the tresses cascade into their arms, however, it takes on the recognizable shape of a cat—and in one painting, two cats—with wide, watchful eyes. None of these women seem to be aware of the mirage, as they carry the feline-like shape in their arms all the same. The colorful botanical backgrounds complete these portraits as windows into a wonderful daydream. 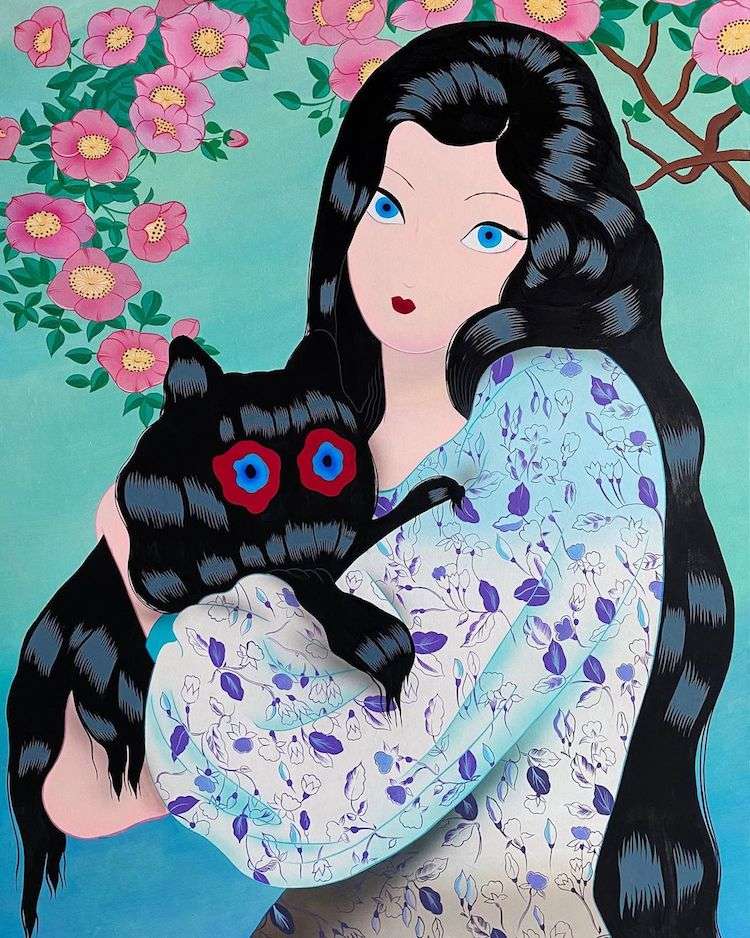 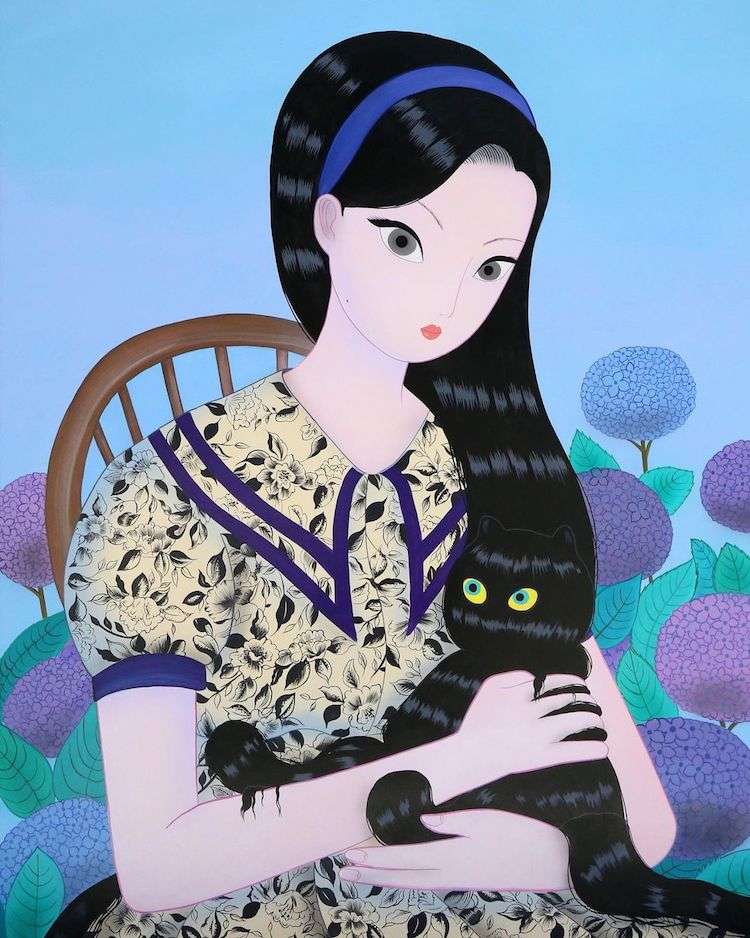 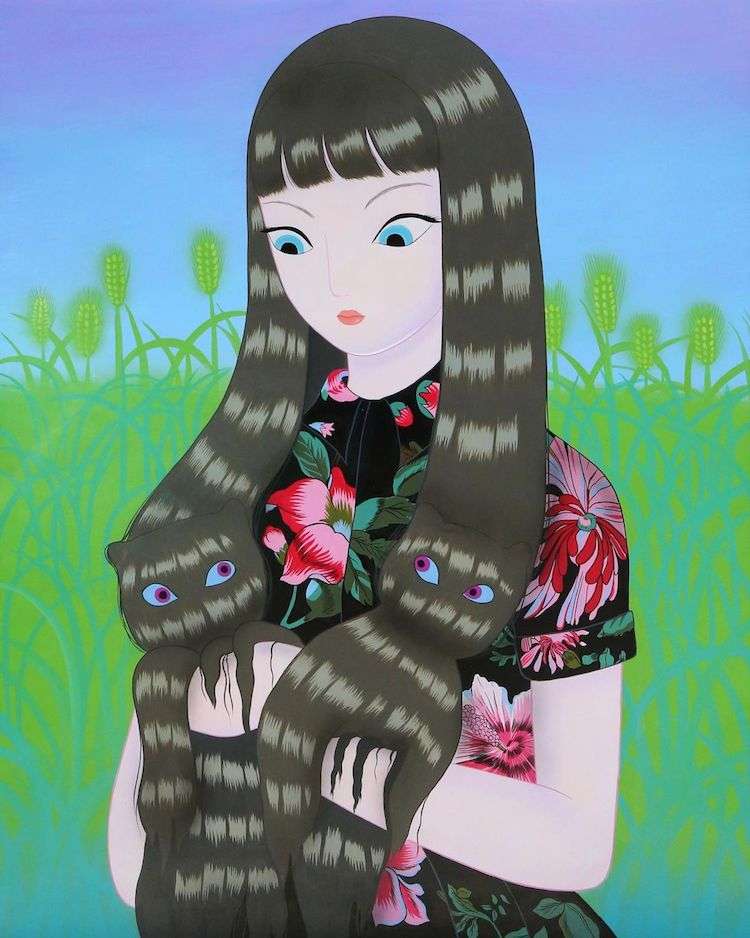 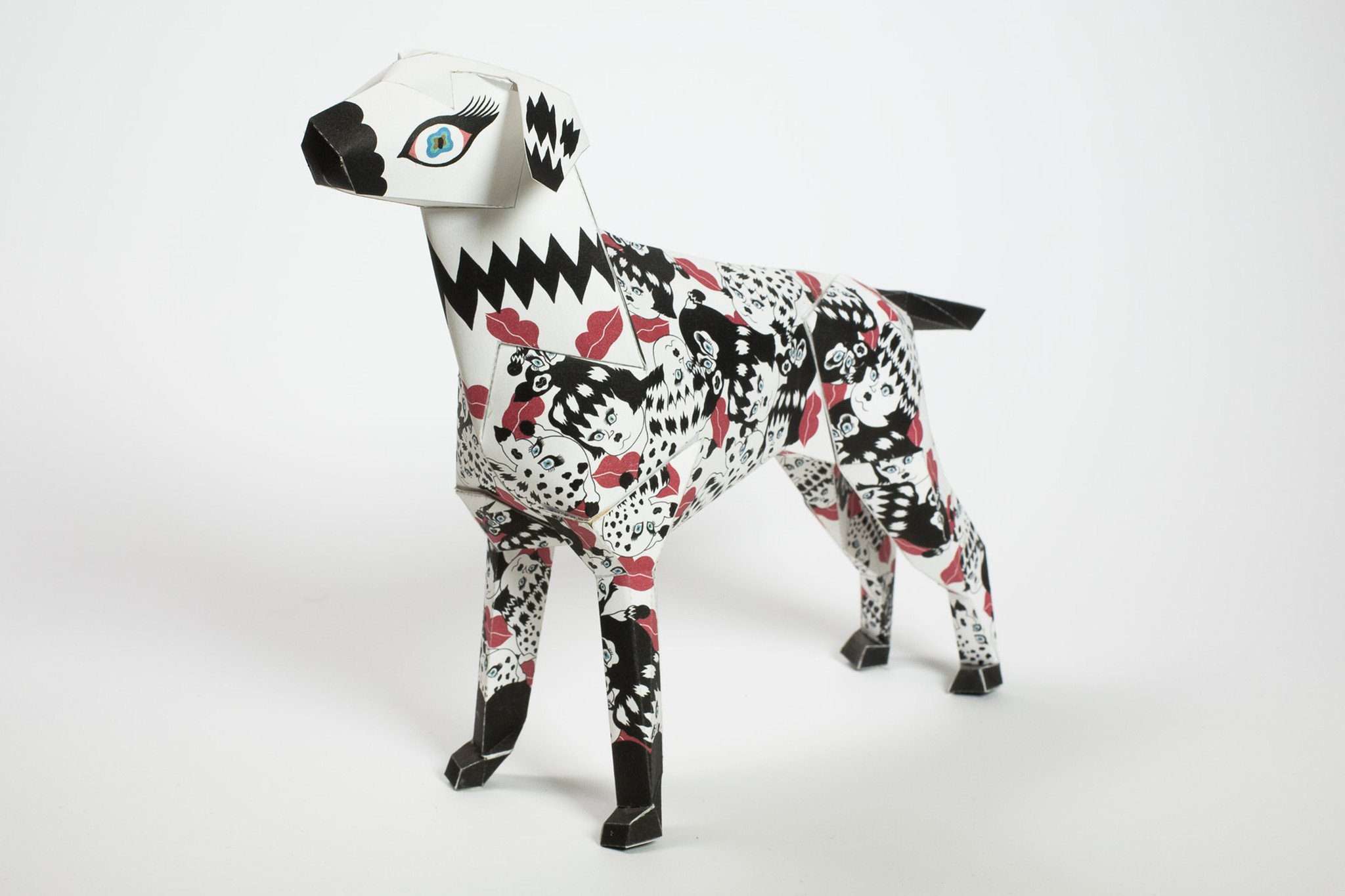 It was an honour to have Jang Koal design a Gerald. At times communication may have been delayed and was more difficult due to different time zones and languages but the art was definitely not lost in translation.  A distinct difference from her recent feline offering, the canine was shipped in a 2D form halfway across the world for Koal to work her magic. With an open brief on what to produce Koal didn’t disappoint.

‘Geh Gerald‘ was born and the design sent across the globe from Seoul to Manchester, UK to be formed into a 3D paper sculpture.

The monochrome style design with ruby red lips dotted across the paper dog, lends itself to Seoul usual style with figures staring intently with cat-like eyes. The dash of colour from the pouty red lips stand out against the monochromed figures which are unusual for Koal but perhaps are representative of the strict Asian culture and traditional values of an upbringing in Korea. Bringing in the mythical aspect of her work the patterns on Gerald’s usually bare coat are to represent lucky charms to assist the Lazerian mascot to get his wish of becoming a real dog someday! 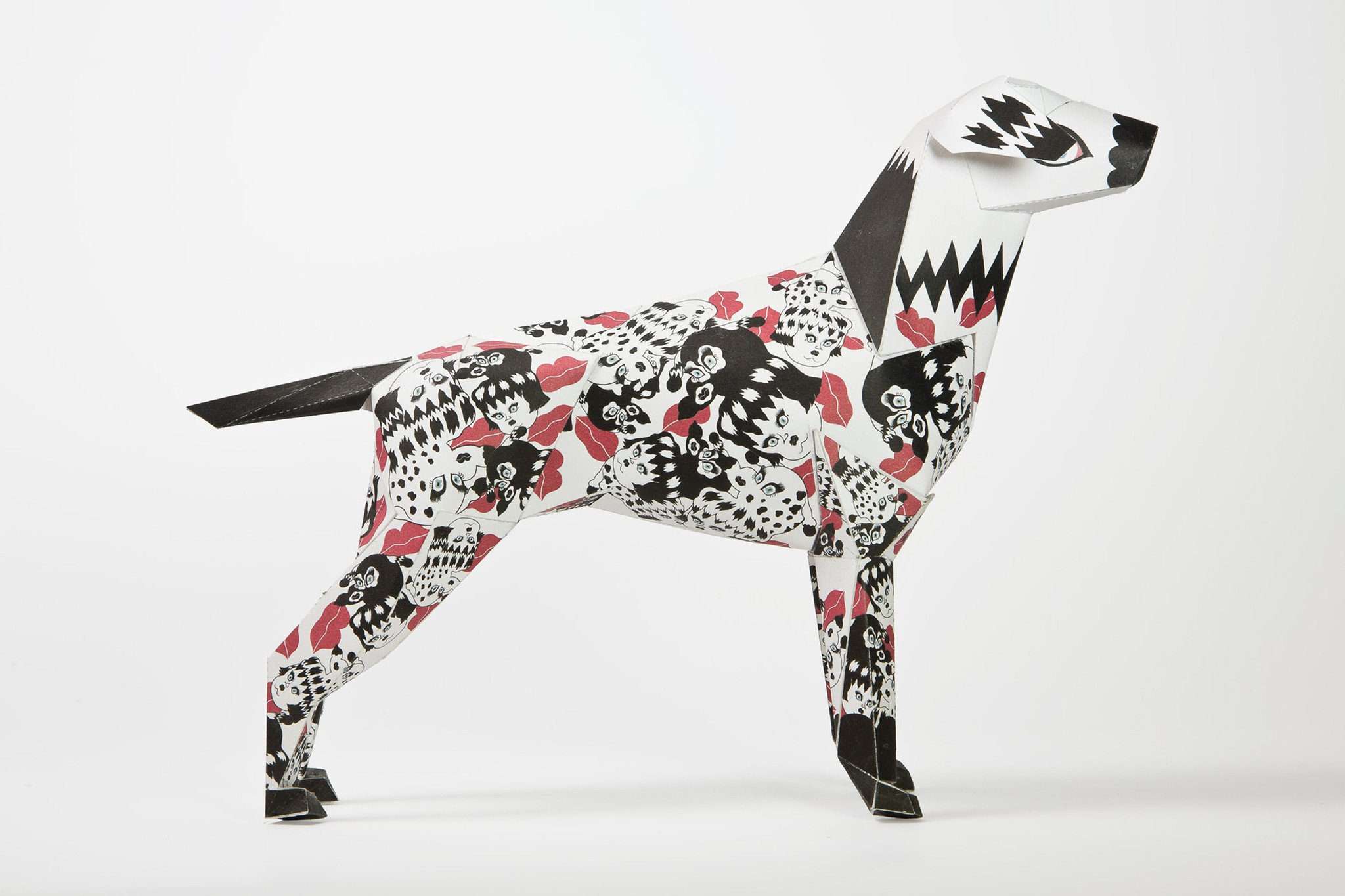 “The patterns on the body are drawn as charms for wishing Gerald be a real dog one day.” - Jang Koal on the meaning of 'Geh Gerald'

The naming of Gerald is very simple and derives from Koal primary language. Taken from the word Gae which is also known as Geh, it simply means ‘dog’ in Korean. Often it appears that people confuse this word to be an alternative and the more common word for dog to be 강아지 (gangaji) but that is actually not true. 개 (geh) is the word to use when wanting to express the meaning of ‘dog’.