Studio – Me and My Pen

Daren Newman is a typographer, illustrator and designer. He has worked with Lazerian several times on various different projects including the Gerald exhibition. In fact he actually designed the accompanying limited edition hard back book entitled ‘Gerald’

He describes himself as – male, smaller than average, good/bad SOH, beard wearing,right-handed, Rotring loving Mancunian. As well as supporting Lazerian since the beginning Daren is also a great friend and very well respected by all the Lazerian team.

Daren has recently gained a massive reaction with his take on the 2020 Olympic Games logo. The event (which is now sadly postponed) is to be hosted in Japan and Newman’s take on this encapsulates Japanese culture as well as elegantly capturing the spirit of the games. The logo has certainly caused mixed reviews but the majority of people appreciate the skill, shape and symbolism behind the design.

T-shirts of the logo have been selling like hot-cakes and can be posted worldwide. For your very own click here. 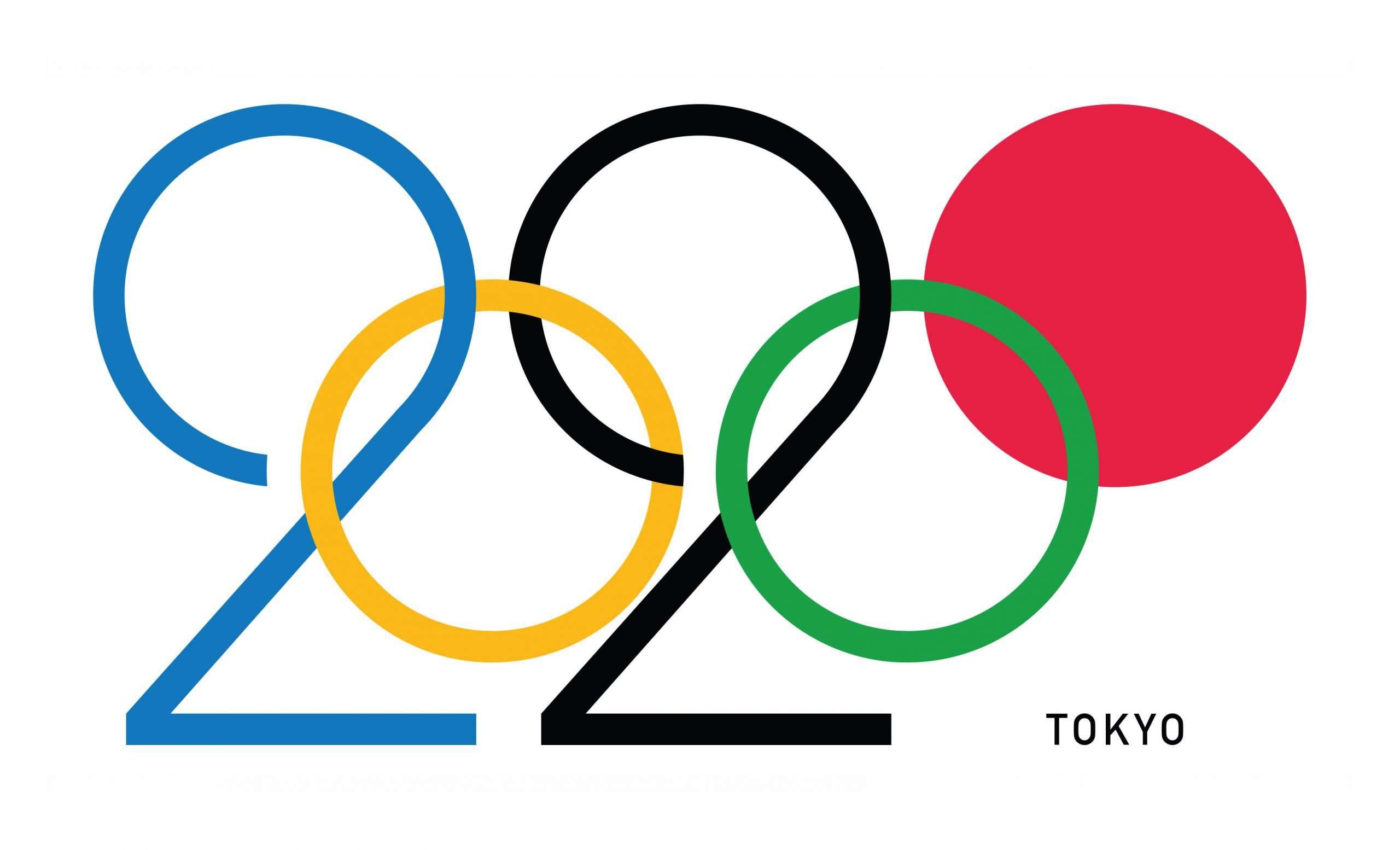 Newman is known for his style and skillmanship- when you see a Daren Newman logo you can recognise it instantly. His hand-drawn typographic and illustrative work is admired and respected by many.

Under his ‘Me and My Pen’ moniker Daren has produced work for brands such as Hikerdelic, Rock Star Spirits, Vanish and Selfridges as well as musicians such as Badly Drawn Boy, Smoke Fairies and Blossoms.

Daren was very involved with the Gerald project from the start. He contributed by designing and creating 2 Geralds (1 unique large Gerald and 1 of the main paper models as well) He also used his skills to design the accompanying limited edition ‘Gerald’ book

The 1st Gerald he completed was  015 Arts and Crufts Gerald 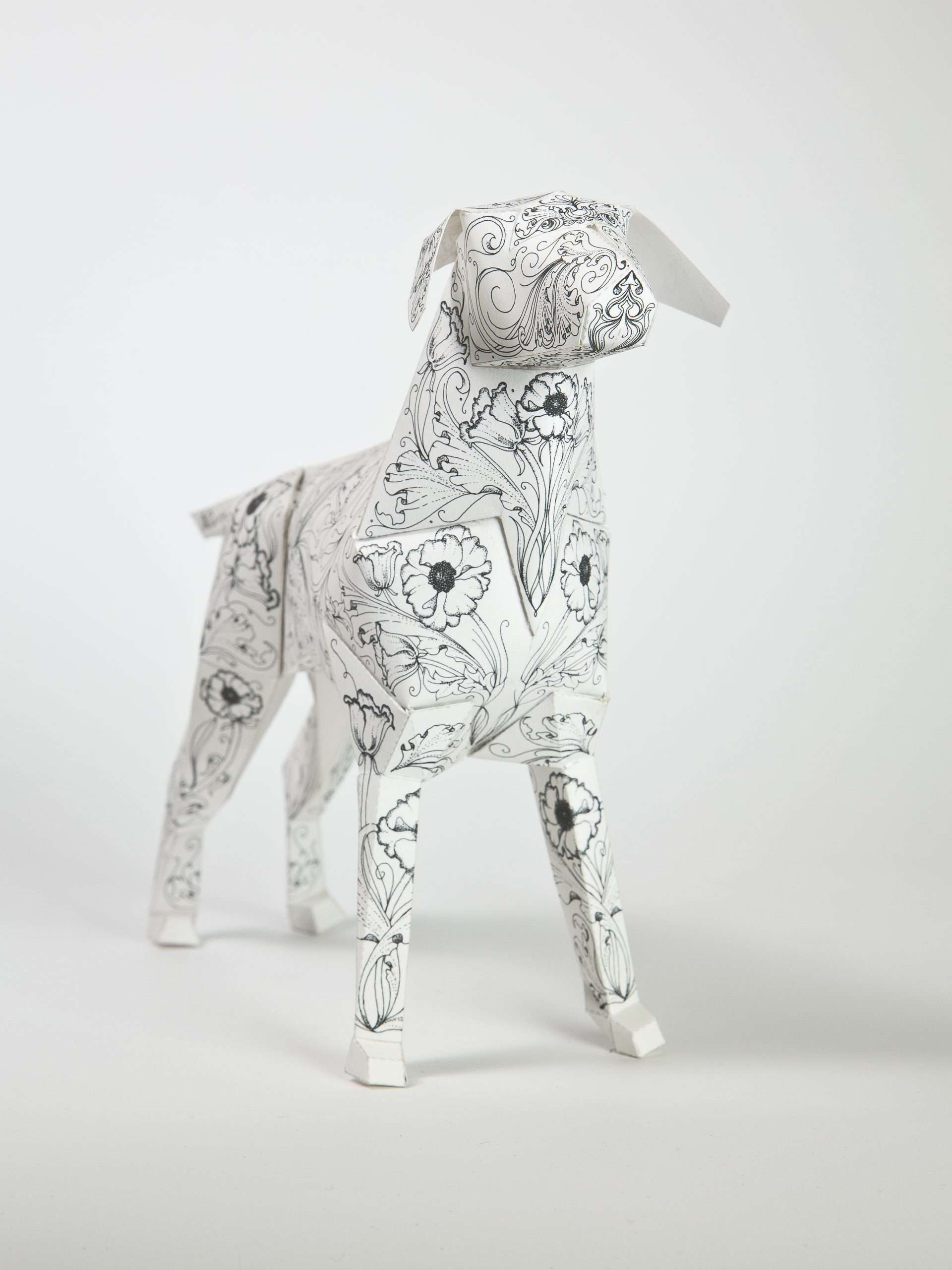 “My Arts and Crufts Gerald was born out of my love for all things Victorian, the industrialisation of Victorian Britain and the reaction against this industrialisation resulting in the Arts and Crafts movement. Lazerian and the Gerald project seem to have a certain synergy with this movement, so I thought I’d focus on this period to base my Gerald design on. Taking influence from the typical floral repeat patterns associated with the Arts and Crafts movement, I’ve created a symmetrical repeat pattern that has been hand rendered in pen and ink.” 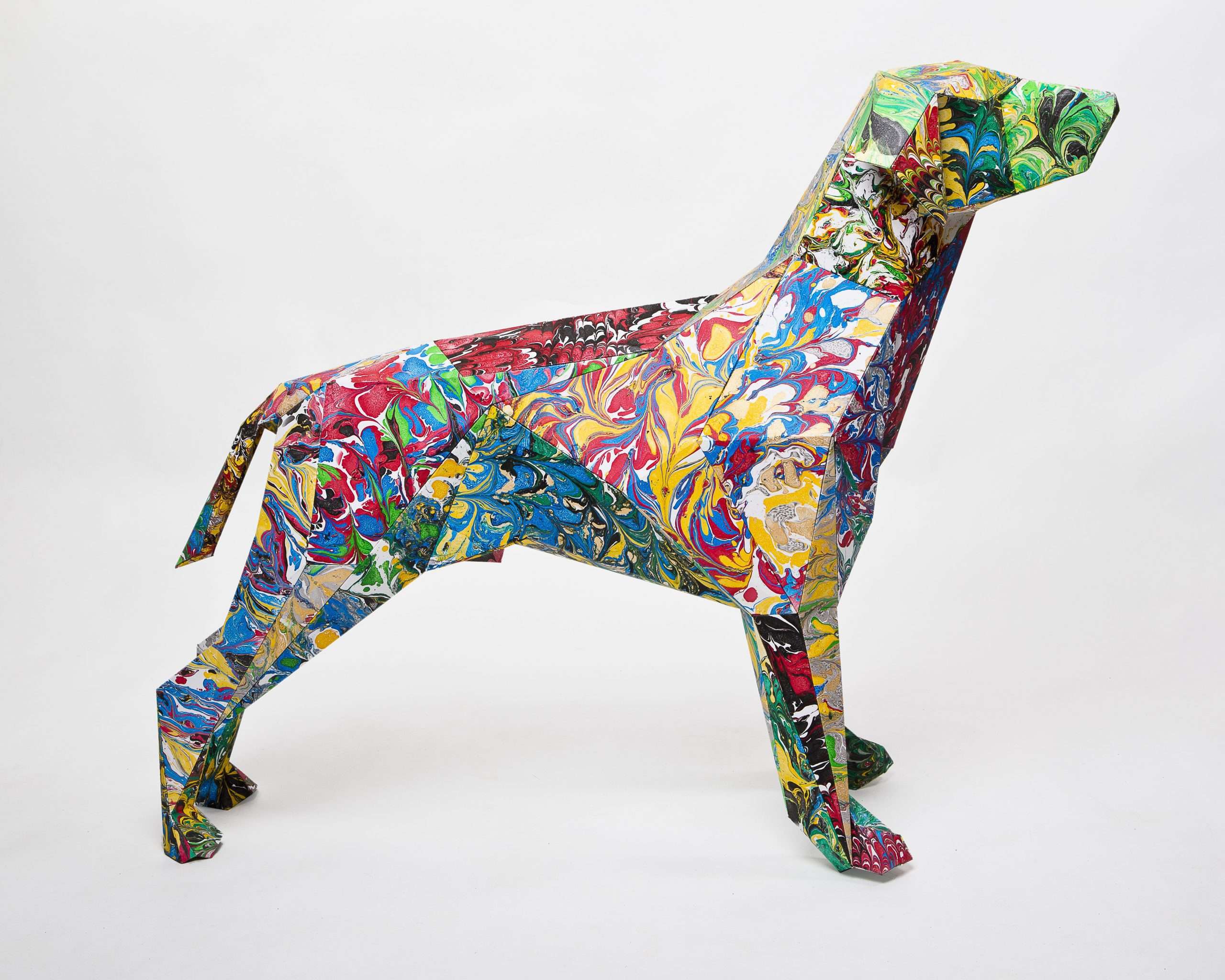 ”My one-off Gerald is again harking back to a Victorian era and their usage of decorative marbling in end papers and the covers of Victorian literature which created unique one-off designs. As Gerald is made from paper and he has a story to tell, it seemed fitting to use this technique to individually decorate each panel. Also… with Lazerian & the Gerald project being at the forefront of modern paper craft it seemed right to juxtapose that with a paper craft from the past.”

The international project to exchange inspired designs for Lazerian’s paper dog sculpture, Gerald, had taken over a year of constant discussion with creatives about how they might give him a new coat.
Once the responses had hit three figures, the Gerald exhibition was being planned in earnest and a partnership had been struck with Britain’s distinguished paper manufacturer, James Cropper, there was only one other way to do everyone’s effort justice – produce a beautiful book. All 120 paper dogs, by 101 designers have their own place in the resulting hard-back, limited edition publication. The theme of the project was carried through to the very last detail, with 101 copies of the book made available for purchase at £101. Lazerian and designer, Daren Newman liaised closely with James Cropper based in Cumbria, UK to ensure that both the project and the paper mill’s own product would be done justice by the choice of stock used and print finishes. The range of papers chosen run from 160gsm to 200gsm, lithograph printed using fluorescent inks and foil detail, throughout. The linen-bound book was completed with an enclosed, carton finish by Henry Mills Bookbinding of Birmingham, UK.
After the heavyweight book’s return to the Lazerian studio, the copies were housed in a plywood ‘kennel’, made in house combining the cnc technologies with hand craft, and a DVD copy of the Gerald in New York film enclosed within. A bespoke, wax seal completed the package. While Gerald has toured New York, London and Sheffield, many of the original artists have had chance to meet up with him again, signing a very limited number of these books while they got reacquainted.